The first shortage was in 2019 when the Obama Administration made a massive government purchase buying more ammo for a Social Security Investigator than a Soldier in the Army uses in a year.  Perhaps they were preparing to quell an uprising by the people. 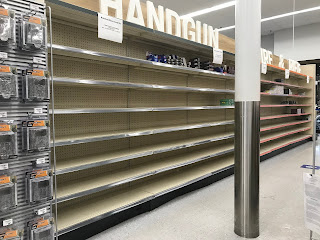 This second one was driven by massive consumer buying due to the violence in large cities, and the fear of a Civil War driven in part by the 2020 US Presidential Election with record numbers of mail in ballots being sent out and hundreds of voter fraud cases documented and no telling how many were not caught.

During this second Ammo shortage, ammo prices doubled and in some cases tripled.  Think about how much more ammo you could have bought if you and spent the same dollars a year ago.  Think about how tight the ammo supply would be if the SHTF.

You can't have too much Ammo, but what are some good amounts to have?

Here is how we answer this question.

Consuming Ammo under the following scenarios, you can see that we can use a lot in an hour.

Think about this... the Light Combat firing rate is BANG....Thousand one, thousand two, thousand three, thousand four, thousand five, BANG!  This is 12 rounds / minute, so definitely not rapid fire or anything unreasonable.  A thousand rounds of ammo will last 1.4 hours at this rate.

So this raises the question, how long do you want your Ammo Supply to last?  Are you sitting down?

Yes, these numbers may seem large, and 8 hours per day is only an example and unlikely, but consider, this is what would be required for just one shooter.  Imagine the Ammo consumption if you had several shooters.

Here is an example for 8 hours of shooting per WEEK.

Here is an example for 8 hours of shooting per Month.

Still big numbers, so I go back to my earlier statement, that you can't have too much ammo.  In a severe economic melt down, 8 hours per day may be realistic early on, but over time dropping to 8 hours per month or even less in time.

One point I would add:  Well in to a SHTF Event, there will be plenty of guns available in the hands of the dead, who ran out of ammo.  So consider investing in more ammo as opposed to more guns, once you have a gun or two for each person in your family/group.

So here are some suggested ammo inventory numbers:

The number is higher on 22 caliber rifles, as that ammo is cheap, can be used to economically train new shooters and hunt small game, but also lay down heavy cover fire.

The numbers are lower on Revolvers & Bolt Actions, which fire & reload slower than Semi-Autos.

Shotguns are higher due to the versatility of the different shot sizes ranging from Slugs, Buck Shot, #4, and #6 shot, all great for hunting different sizes of game animals.

Here is a reasonable price at which I would consider stocking up to have enough Ammo. 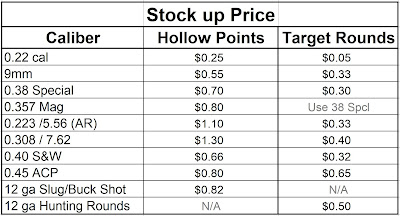 At these prices above, and the quantities higher above, here is what you might expect to invest, considering 10% Premium Personal Protection ammo and 90% target rounds.

Even without a major SHTF event, ammo is often in short supply.  Imagine how bad it could be.

Plan ahead and stock up when the time is right.

For more information visit our related links below:
Blog Table of Contents
Best Prepper Websites (vote for this one)
Complete Sustainable Living Plan

Handgun Introduction
What is a Prepper?