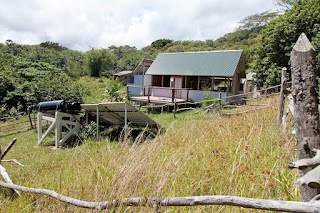 Security for a Country Home or Retreat is different than an Urban Home.  You generally have more area to cover with fewer people. I recommend at least 4, preferably 6, wireless security cameras powered from solar charged batteries.  This will allow you to watch more area, both night and day although night attacks are the most dangerous threat, especially if you don't have Night Vision or Thermal Vision gear and the attackers do.  In addition to the cameras surrounding the Retreat, motion detectors, trip wires and traps along key avenues of access are needed to provide several layers of security.

Monitor the cameras 24/7 in 6 hour shifts and have Security Patrols and Rovers that have practiced Group Security Drills. The Security patrols would consist of ideally two groups, each containing 2-4 people and a dog (Rover).  Dogs see and smell better than humans, therefor will detect intruders much faster than people, plus they make good companions. German Shepherds are probably the best choice of dog. Each member of the Security Patrol should have certain common supplies in their Security Patrol Pack.  These Teams will later be your Scout Patrols to gather Actionable Intelligence and Salvage for Supplies. Game cameras, strategically located, can show where potential threats have probed or investigated your group.

Good Security Patrols do not follow a pattern, as patterns can be learned, thus rendering the patrols vulnerable. By doing a 6 hour rotation, you could use a minimum of 15 people for security. Every group would work each of the shifts, so as to not stick the same group on at the same time everyday. The Command Post Leader would monitor the cameras, trip wires, alarms, etc. so that he/she can alert the Security Patrol to potential intruders using a good set of Radios for communication.

In addition to, or alternately in place of your Security Patrol(s), having Lookout, Out Post or Listening Posts might be advisable with cached supplies nearby. Having a Rapid Deployment Team to support these Out Post Teams is good if you have enough people, but be careful not to over react to a diversionary attack and leave your retreat or back side weak and vulnerable.  When encountering threats it may be better to fall back toward your retreat and regroup than to send man power forward and leave the retreat under-staffed.  So have planned fall back locations.


As I sit here thinking about this, I have many scenarios running through my head, and planning for every possible action is impossible. I suggest drafting some standard operating procedures (SOPs), detailing travel routes, primary and secondary defensive positions depending on where an attack may come from, home invasion plan medical and trauma guides, etc... Then practice the SOPs with your team, determine what works and what doesn't, then fine tune your SOPs. The goal is for everyone to know what to do when something happens, i.e. attack from the west, security and residents take up positions to repel that attack. You'll want people guarding all key points of the compound.  Have several defensive plan options with code names.

If I ran an enemy unit, I would use small groups to attack key structures (rain water collection unit, solar grid, livestock, etc.) as this would require people to come out and fix it, as well as bring security out in the open to protect whoever is working on the unit. Knowing approximately where the guards will be during repairs, I would position snipers to take them out of action... wound if possible, kill if necessary. A wounded person slows people down and causes more burden than a dead person.  Our defensive counter to this is to determine where these snipers are likely to be and deploy a Scout Team to check them before going back out.
Walls would be ideal, but they might not be practical, it all depends on the overall setup. Walls don't necessarily have to be strong enough to keep people out; they just need to keep people from seeing in
The last step is to have evacuation plans along with primary and secondary regrouping locations. Topics like these are covered in the Prepper Handbook available on Amazon Kindle for $4.99, but in the end, you must develop your own confidential plans. These can only serve as food for thought. Good luck and stay safe.
For additional information see the following links:
Blog Table of Contents;

Posted by Prepper Handbook at 7:30 PM