When the Ammo runs out 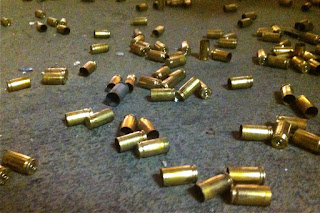 What happens when the SHTF and we reach TEOTWAWKI (The End Of The World As We Know It) and The Ammo Runs Out (TARO)?

At this point, there are effectively two options.

First is a flint lock muzzle loader weapon and having the ability to cast your own bullets and make your own black powder.  This takes a lot of science and technology, but offers long range precision strikes.

The second option is Archery; A bow and arrow.  These are easier to build, maintain and can be fired faster than a single shot muzzle loader and it is silent making it a superior weapon at close range and when stealth is necessary.

Which option is best?  Both options are affordable but my priorities would be as follows.
After this, if you want a 50 caliber Muzzle Loading Black Powder Rifle, then I strongly recommend a Flint Lock and NOT a percussion model.  Also buy a bullet mold, a lead ladle and a melting pot for making your own bullets.  You can get the weights off of tires to melt and make bullets.  Gun Powder is another story completely.


The current standard composition for the black powders that are manufactured by pyrotechnicians was adopted as long ago as 1780. Proportions by weight are 75% potassium nitrate (known as saltpeter or saltpetre), 15% softwood charcoal, and 10% sulfur. These ratios have varied over the centuries and by country, and can be altered somewhat depending on the purpose of the powder. For instance, power grades of black powder, unsuitable for use in firearms but adequate for blasting rock in quarrying operations, is called blasting powder rather than gunpowder with standard proportions of 70% nitrate, 14% charcoal, and 16% sulfur; blasting powder may be made with the cheaper sodium nitrate substituted for potassium nitrate and proportions may be as low as 40% nitrate, 30% charcoal, and 30% sulfur. French war powder in 1879 used the ratio 75% saltpetre, 12.5% charcoal, 12.5% sulfur. English war powder in 1879 used the ratio 75% saltpetre, 15% charcoal, 10% sulfur.

Potassium nitrate is a chemical compound with the formula KNO3. It is an ionic salt of potassium ions K+ and nitrate ions NO3−. It occurs as a mineral niter and is a natural solid source of  nitrogen. Potassium nitrate is one of several nitrogen-containing compounds collectively referred to as saltpeter or saltpetre.


Major uses of potassium nitrate are in fertilizers, rocket propellants and fireworks. It is one of the major constituents of gunpowder (blackpowder) and has been used since the Middle Ages as a food preservative. Potassium nitrate is also one of the main ingredients in high explosives.


History of potassium Nitriate or saltpeter
From mineral sources


The earliest known complete purification process for potassium nitrate was outlined in 1270 by the chemist and engineer Hasan al-Rammah of Syria in his book al-Furusiyya wa al-Manasib al-Harbiyya ('The Book of Military Horsemanship and Ingenious War Devices'). In this book, al-Rammah describes first the purification of barud (crude saltpetre mineral) by boiling it with minimal water and using only the hot solution, then the use of potassium carbonate (in the form of wood ashes) to remove calcium and magnesium by precipitation of their carbonates from this solution, leaving a solution of purified potassium nitrate, which could then be dried. This was used for the manufacture of gunpowder and explosive devices.


At least as far back as 1845, Chilean Saltpeter deposits were exploited in Chile and California, USA.

From caves
A major natural source of potassium nitrate was the deposits crystallizing from cave walls and the accumulations of bat guano in caves. Extraction is accomplished by immersing the guano in water for a day, filtering, and harvesting the crystals in the filtered water. Traditionally, guano was the source used in Laos for the manufacture of gunpowder for Bang Fai rockets.


Perhaps the most exhaustive discussion of the production of this material is the 1862 LeConte text. Many references have been made to a method using only straw and urine, but there is no such method in this work.


Niter-beds are prepared by mixing manure with either mortar or wood ashes, common earth and organic materials such as straw to give porosity to a compost pile typically 1.5×2×5 meters in size. The heap was usually under a cover from the rain, kept moist with urine, turned often to accelerate the decomposition, then finally leached with water after approximately one year, to remove the soluble calcium nitrate which was then converted to potassium nitrate by filtering through the potash.


LeConte describes a process using only urine and not dung, referring to it as the Swiss method. Urine is collected directly, in a sandpit under a stable. The sand itself is dug out and leached for nitrates which were then converted to potassium nitrate via potash, as above.


From 1903 until the World War I era, potassium nitrate for black powder and fertilizer was produced on an industrial scale from nitric acid produced via the Birkeland–Eyde process, which used an electric arc to oxidize nitrogen from the air. During World War I the newly industrialized Haber process (1913) was combined with the Ostwald process after 1915, allowing Germany to produce nitric acid for the war after being cut off from its supplies of mineral sodium nitrates from Chile (see nitratite). The Haber process catalyzes ammonia production from atmospheric nitrogen, and industrially produced hydrogen. From the end of World War I until today, practically all organic nitrates have been produced from nitric acid from the oxidation of ammonia in this way. Some sodium nitrate is still mined industrially. Almost all potassium nitrate, now used only as a fine chemical, is produced from basic potassium salts and nitric acid.


Potassium nitrates supplied the oxidant and much of the energy for gunpowder in the 19th century, but after 1889, small arms and large artillery increasingly began to depend on cordite, a smokeless powder which required in manufacture large quantities of nitric acid derived from mineral nitrates (either potassium nitrate, or increasingly sodium nitrate), and the basic industrial chemical sulfuric acid. These propellants, like all nitrated explosives (nitroglycerine, TNT, etc.) use both parts of the nitrate ion: the oxygen promotes rapid combustion (thermal energy), and the expansion of the previously solid nitrogen to N2 gas provides kinetic energy.


Potassium nitrate can be made by combining ammonium nitrate and potassium hydroxide.

An alternative way of producing potassium nitrate without a by-product of ammonia is to combine ammonium nitrate and potassium chloride, easily obtained as a sodium-free salt substitute.


Potassium nitrate can also be produced by neutralizing nitric acid with potassium hydroxide. This reaction is highly exothermic.


On industrial scale it is prepared by the double displacement reaction between sodium nitrate and potassium chloride.


Potassium nitrate has an orthorhombic crystal structure at room temperature, which transforms to a trigonal system at 129 °C. Upon heating to temperatures between 550 and 790 °C under an oxygen atmosphere, it loses oxygen and reaches a temperature dependent equilibrium with potassium nitrite:

Potassium nitrate is moderately soluble in water, but its solubility increases with temperature. The aqueous solution is almost neutral, exhibiting pH 6.2 at 14 °C for a 10% solution of commercial powder. It is not very hygroscopic, absorbing about 0.03% water in 80% relative humidity over 50 days. It is insoluble in alcohol and is not poisonous; it can react explosively with reducing agents, but it is not explosive on its own.

Uses
Potassium nitrate has a wide variety of uses, largely as a source of nitrate.

Fertilizer.
Potassium nitrate is mainly used in fertilizers, as a source of nitrogen and potassium – two of the macronutrients for plants. When used by itself, it has an NPK rating of 13-0-44.

Oxidizer
Potassium nitrate is an efficient oxidizer, producing a lilac-colored flame upon burning due to the presence of potassium. It is one of the three components of black powder, along with powdered charcoal (substantially carbon) and sulfur, both of which act as fuels in this composition. As such it is used in black powder rocket motors, but also in combination with other fuels like sugars in "rocket candy". It is also used in fireworks such as smoke bombs, made with a mixture of sucrose and potassium nitrate. It is also added to cigarettes to maintain an even burn of the tobacco and is used to ensure complete combustion of paper cartridges for cap and ball revolvers.

Food preservation
In the process of food preservation, potassium nitrate has been a common ingredient of salted meat since the Middle Ages, but its use has been mostly discontinued due to inconsistent results compared to more modern nitrate and nitrite compounds. Even so, saltpeter is still used in some food applications, such as charcuterie and the brine used to make corned beef. Sodium nitrate (and nitrite) have mostly supplanted potassium nitrate's culinary use, as they are more reliable in preventing bacterial infection than saltpetre. All three give cured salami and corned beef their characteristic pink hue. When used as a food additive in the European Union, the compound is referred to as E252; it is also approved for use as a food additive in the USA and Australia and New Zealand (where it is listed under its INS number 252).

Food preparation
In West African cuisine, potassium nitrate (salt petre) is widely used as a thickening agent in soups and stews such as Okra soup and Isi ewu. It is also used to soften food and reduce cooking time when boiling beans and tough meat. Salt petre is also an essential ingredient in making special porridges such as kunun kanwa literally translated from the Hausa language as 'salt petre porridge'.

Used historically to treat asthma. Used in some toothpastes to relieve asthma symptoms.

Used in Thailand as main ingredient in Kidney Tablets to relieve the symptoms of cystitis, pyelitis and urethritis.

Combats high blood pressure and was once used as a hypotensive.

Other uses
Electrolyte in a salt bridge

Active ingredient of condensed aerosol fire suppression systems. When burned with the free radicals of a fire's flame, it produces potassium carbonate.

Component (usually about 98%) of some tree stump removal products. It accelerates the natural decomposition of the stump by supplying nitrogen for the fungi attacking the wood of the stump.

In heat treatment of metals as a medium temperature molten salt bath, usually in combination with sodium nitrite. A similar bath is used to produce a durable blue/black finish typically seen on firearms. Its oxidizing quality, water solubility, and low cost make it an ideal short-term rust inhibitor.

To induce flowering of mango trees in the Philippines.

Thermal storage medium in power generation systems. Sodium and potassium nitrate salts are stored in a molten state with the solar energy collected by the heliostats at the Gemasolar Thermosolar Plant. Ternary salts, with the addition of calcium nitrate or lithium nitrate, have been found to improve the heat storage capacity in the molten salts.

Posted by Prepper Handbook at 9:07 PM