We hear a lot about Bugging Out, but we need to think about this from another perspective, Bugging In, or already being at our Bug Out location (BOL).

About 50% of the world’s population lives within 100 miles of the coast making the population density there about 6X the rest of the world. In a serious Event, we will see hoards of people migrating out of the cities very quickly as water and supplies run out. Historically mass migrations have not gone well and this will be no exception.

The worst devastation will start in the coastal cities with riots, looting and home invasions quickly moving inland. Know the Red Flag warnings its time to bug out and getting out early will be important. Limited gas will give the masses a few hundred miles jump-start, and then they will be on foot foraging.  With a pack of supplies, people can travel about 10 to 20 miles per day on foot.

Untreated water will get many of them but this horde will start reaching most areas in a week to 10 days. The full force will arrive around 2-3 weeks. Having exhausted food supplies the first week or two, they will be desperate for something to feed their children. Hunters from the city will pursue the limited supply of wild game in the woods but they will soon be scarce if not already by this time.  Foraging for edible plants will be one of the last resources, but one that might sustain them for a long time.  Wild foods like Hackberries or Chickweed, Cat Tails, Cat or Green Briar Roots and Dandelion leaves.

Traveling together, they will form large loosely organized groups of dozens if not hundreds of people with several leaders. There will be a few unscrupulous street Gangs that are initially smaller but already highly organized due to having a clear disciplined leadership structure. Both groups will represent serious threats, especially to unorganized residents, making it very important that we have group security in place that is mentally tough.

The real difficulty will be in making the tough decisions to protect your group and have everyone agree to support it. Do we share and potentially deplete our limited food supplies or hoard them all to ourselves? Once you share, word will get around and a hungry mob may soon be kicking in your door. Discussing this ahead of time and reaching an agreement will be the key.

The Prepper Handbook covers these topics and offers potentials solutions including extensive Security Plans and much more that you may not have thought of.

Look at the free preview of the Prepper Handbook by JR Ray on Amazon.


For additional information see the following links:
Blog Table of Contents
Red flag warnings its time to Bug Out

Posted by Prepper Handbook at 7:43 PM No comments:

Throughout history, silver (followed by gold), has been the most common form of stable currency, while paper money has failed to hold its value. 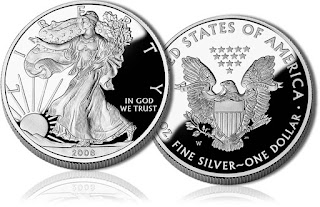 Countries and governments have typically lasted several centuries before experiencing an invasion, revolution, and/or economic and social break down; upon which their paper currency becomes worthless. Read about hyperinflation on Wikipedia. For this reason, and because precious metals have value that survives the test of time, they can be a good investment.

But let me be clear that I am NOT a financial adviser & I do not sell silver. However, in my unprofessional opinion, having a small percentage of your wealth in precious metals like silver (my favorite) is a good idea. Old silver coins or the US Silver Eagle 1 oz silver dollar will always be a recognized and valued currency and therefore a good one to have.  Pennies prior to 1982 contain about 2 to 3 cents worth of copper and might be good to save.

Silver prices are at a 5-year low as we enter 2015, perhaps making it a good time to buy. Keep a few sliver coins in your home as well as some paper cash for those times when electricity or the teller machines and credit card scanners are not working.

In addition to coinage, barter has been a key part of economic trade. Having sustainable goods that would be needed during hard times might also make a good investment in a worst-case scenario type event. See the Top 10 Barter Goods.

Now some might say that silver is not a good investment… that I bought some back in 1960 at $7.00 per ounce and it is only worth $15 per ounce today, and that would be a correct statement. However, let’s look at an alternative currency that we all use, the US paper dollar. In 1964, when the US minted the last 90% silver coins, a US dollar could buy the following:
But today, the same US paper dollar buys:
Making our dollar worth about 1/15th what it was or 7 cents on average compared to 1964, while our silver dollar at a 5-year low value will still buy essentially the same goods that it and the paper dollar did in 1964.  Now which is the better investment?  Silver Eagles make good gifts too.

Think about this:  The 401k savings plan was created hoping to supplement the failing Social Security (SS) system. With Americans having their own savings, the drastic cuts needed to save SS will not be quite as devastating.  The sudden move by millions of people to invest 401k money led to prosperous times for the stock market. But what will happen when Baby Boomers stop putting their huge amounts of money in to the stock market and start taking it out instead and moving it to FDIC insured investments?  At this same time they stop paying into SS and start drawing money out.  There are fewer and fewer workers to support the unfunded SS debt.  With the mass printing of US dollars they will become worth much less.  Inflation will soar.  The government may move to an electronic currency instead of paper so the slow printing presses are no longer a bottleneck to expanding their money supply. More money supply leads to higher inflation.  The potential for the most devastating recession in history could be ahead....CRASH!

This will also give the government control over all trade, prices, pay, taxes, States funds, etc. with the ability to seize or freeze funds quickly.  Barter and black markets will grow but be highly illegal.

For more information, see the Prepper Handbook preview on Amazon. If you don't have a Kindle, you can down load their free reader to your computer to buy and read the whole book.

The first question to answer, is how much do I need? The answer varies based on how long you want to be prepared for. There are various levels as covered in the "Incremental Prepper Plan" in the Prepper Handbook by JR Ray that help answer the how long question. In this post, we will talk about a logical approach to building your food stores.


Your first level is to start out buying a few extra of your usual can goods each time you go shopping, especially those with long shelf lives like canned salmon or tuna, but also vegetables and pasta. There are some good storage systems discussed in the Prepper Handbook with a sample shown below. 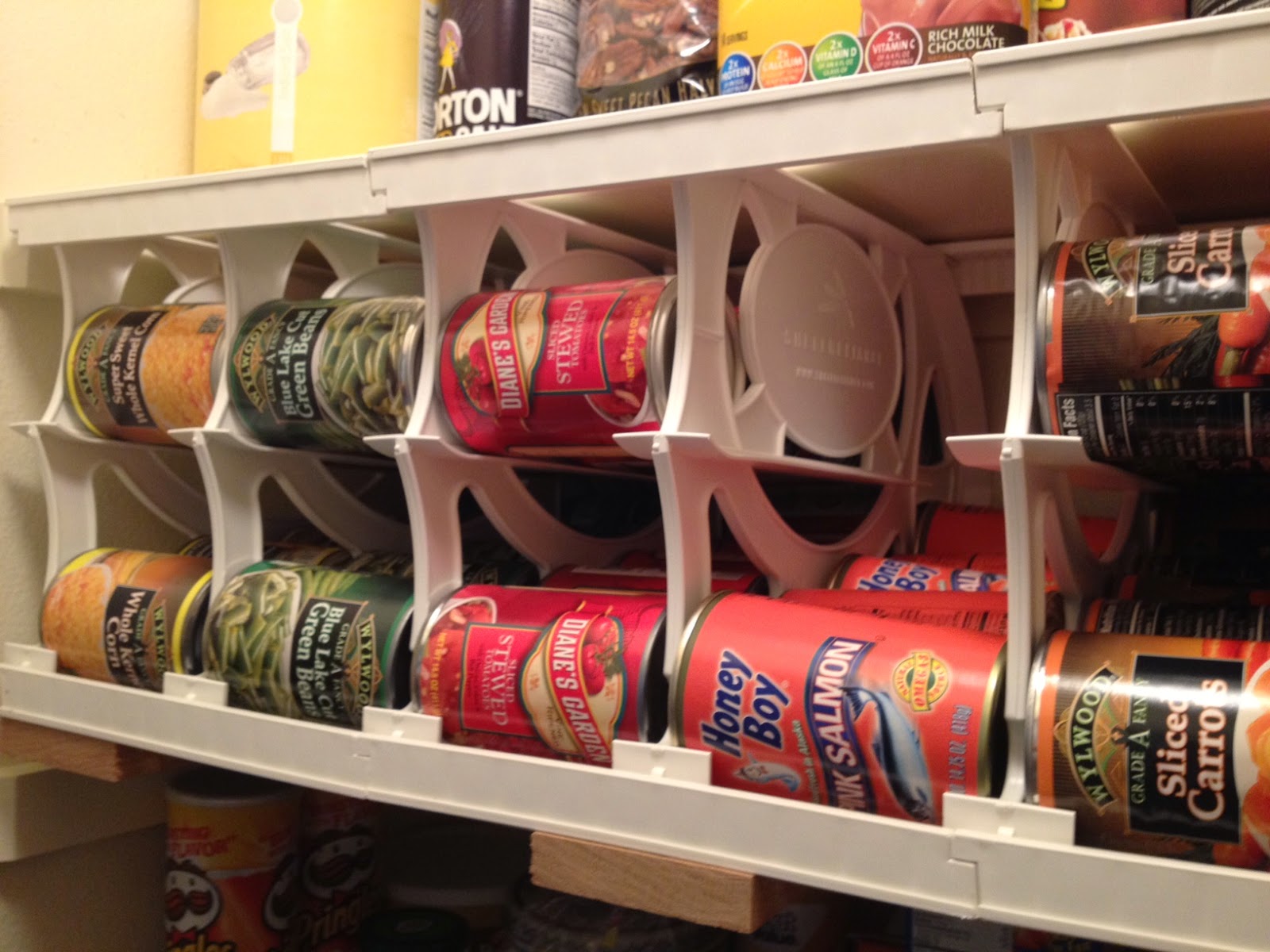 This system can be used to store and rotate your common vegetables, soups, and long shelf life canned foods.

A good stocking strategy needs to consider your consumption and the shelf life of the particular food. For example, suppose you eat on average one can of corn every week. That is 52 cans per year that you would be expected to consume. Now also suppose that the shelf life or expiration date is 2 years out. That would mean that the most you could keep would be up to 52 weeks x 2 years = 104 cans in stock which would be a 2-year supply.

I might start out with an initial goal of 13 to 26 extra cans, which is 3 to 6 months supply. Then after many of your other needs are in place you can ramp up your target to 52 cans which is a year supply. Our incremental strategy needs to be used in many places since no one has unlimited money to go out and buy a ton of supplies.

Second, I strongly suggest you get some long-term (25-year ) storage foods, which are kept at more than one location. The Prepper Handbook provides a “Calculator” where you can determine your food needs. Then once you review / edit your foods, you can put them in a “Q” that allows you to set up a budget and get say $50 per month shipped to you. Rice, Beans & Wheat are the lowest cost foods. Make this your secondary food store behind having your pantry full of the canned foods you normally eat.  A basic 90 supply of food for one person costs less than $200 as shown below.


For more information on this, you can e-mail us at: PrepperHandbook2014@gmail.com and we can set you up to get your budgeted amount of food stores, foods that you select, sent to you each month.

The last stage of your food stores plan is to have gardening, livestock, and a sustainable food plan as outlined in the Prepper Handbook

You need enough can goods and food in your pantry to last a minimum of 2 weeks, and preferably 60 days. Then when your other important preparations are covered as outlined in the Incremental Prepper Plan, you need to expand your food stores to last 6 to 12 months. This gives you time to expand your garden and grow your own food.

At this point, you would need to be gardening and have food preservation supplies and skills in place to survive year after year as a part of a sustainable living style. Then you are truly prepared for a worst-case scenario, at least with regard to food supplies.

So in reality, food is the last part of a solid survival plan. The Prepper Handbook has an Incremental Prepper Strategy to guide you through prioritizing, organizing, and developing your preparations over time and within a budget.