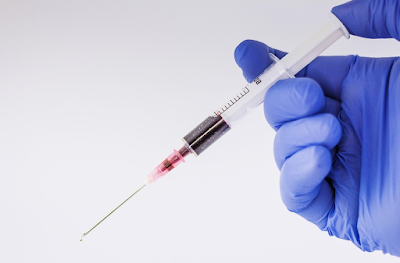 Modern Science has brought about significant medical advances during our life time, with many more being studied.  While our scientific knowledge is at the highest level in history, we also realize, that so is our level of ignorance. The more we learn, the more we realize how much we don't know.  For every question answered, many more are raised.

Today, Flu Vaccines are becoming mandatory in public schools, for hospital workers and many other places.  Often however, these people still get the flu. So why is it so critical to force everyone to take the vaccine?  They are the ones who will feel bad, so it should be their decision. If the vaccine works, then they won't infect those who do get vaccinated, so what business is it of theirs.

This is usually the time people start preaching about the poor children who get the flu and suffer because of their parents choice and the CDC Estimates that somewhere between 37 to 172 children die each year from the flu.

Should it be required for women seeking abortion or on welfare having children to get sterilized so it doesn't happen again?

How far does it go?

But we haven't gotten to the worst part yet.  What happens when everyone is taking the vaccine and it gets contaminated with something bad like AIDS, intentionally or accidentally?

Would a radical Islamic suicide bomber contaminate our vaccine intentionally? Of course they would.

What happens when the flu vaccine mutates like in the show I am Legend? where the measles virus was used to create a cure for cancer, but mutated causing deadly & highly contagious side effects.

According to the World Health Organization, AIDS is the worst Pandemic in modern history, with over 70 million deaths.  This is far less than abortion which has claimed over 1.72 Billion.  The problem with AIDS, is that the patient can be infected for 5-10 years before they even realize they have it, while infecting others.

What would the AIDS fatalities soon become if the MANDATORY flu vaccine was contaminated for 5-10 years? NOW we are getting to the bad part when Americans begin to die from AIDS at record numbers.

But the survival rate of AIDS is improving.  So instead of AIDS, suppose the Flu Vaccine is infected with something worse, that kills people after 2-3 years when everyone would have taken it.

Americans have just become extinct to save 37 to 172 children per year. Low probability, yes, but extremely high severity.

In a country where the citizens are supposed to be free, we should educate the public as to the benefits of vaccines AND to the risk of getting and not getting the vaccine.  The risk will be shocking. We must present both sides accurately and let informed people make up their own mind.

If you have been vaccinated, and it works, why should you care?

Being exposed to common illness and developing our own natural immunity will enable us to over come disease and help our species to survive.  Granted there are things like Polio and Small Pox that may require a vaccination, but these were rare exceptions that everyone was eager to get treated for.

God Bless America, land of the free, home of the brave.  Lets keep it that way.

Or click on a label below for similar topics.
Posted by Prepper Handbook at 7:54 PM No comments:

Dr. Peter Johnson is an honest, professional neurologist in Cypress.
In a letter to patients, Dr. Johnson describes what he calls “a weakness in infectious control practices,” which could potentially result in a patient contracting Hepatitis B, Hepatitis C, or HIV.
FOX 26 News reached out to Dr. Johnson several times by phone and went to the clinic where he works to try to get some answers, but there has been no response yet

Millions Are Lining Up for Balance Transfer Cards Like ThisThe Ascent
"She had several series of injections at the base of her skull and the back of her head,” said Tonya Pruett. She explained that her 21-year-old daughter was referred to Dr. Johnson because she had debilitating migraines.

Pruett said the doctor recently called her daughter with some disturbing news.
"She immediately called me in a panic, in tears, and said, 'Mom, I just got a call from the neurologist who did those injections in my neck and he told me I had to go get tested because they might have been contaminated! What do I do?,” shared Pruett.
In a letter sent to Pruett’s daughter, Dr. Johnson stated, “We have discovered a weakness in infection control practices pertaining to the use of multi-dose vials used in….injections (you received). Although we are not aware that you or any of our other patients have been exposed to any infectious agents, there is a minimal risk of possible exposure to certain blood borne pathogens."
Patients receiving these letters are being advised to get tested for Hepatitis B, Hepatitis C, and HIV.
It’s not clear from the letter specifically how contamination might have occurred.
FOX 26 asked an independent physician to review the letter and she said that the contamination could be the result of either a drug manufacturing problem, which is not mentioned in the letter, or the result of double dipping.
The doctor explained to FOX 26 that such a risk could occur if a needle from a patient with a blood-borne illness was put back into the drug vial, potentially contaminating the medication which is then used in the next patient.
In the letter from Dr. Johnson, he also stated, “We have taken extensive measures to prevent similar occurrences in the future."
It is not known how many patients received the letter.

Posted by Prepper Handbook at 9:35 PM No comments: