As we watch the survival show Alone, we all think about what ten items we would pack. With season 3 finished, we know what things the winners packed. This could be a good indicator of what tools would help insure our success.

But before we talk about what the winners packed, lets look at a few of the things that the winners did NOT take:
The Bow and Arrows could be used to harvest larger game for substantial food supplies that would make the difference between surviving and thriving. For this reason, it is something I would include in my list. Having made my own bow and being a decent shot with them, I know it is not easy task to get within re-curve bow range of wild game, but with out one, big game are impossible. Bow fishing is another avenue to food that such a tool offers. Winners didn't take food rations either, instead opting for long term tools over short term substance.

My list would also include the Bivy for warmer sleeping.  This would make it unnecessary to burn excessive calories building a more elaborate shelter. A tarp and para-cord lean-to will be sufficient.

Here are the common things selected by the winner:
Often I debate on whether to have an Ax or a Saw, but the winners took both. My list includes neither as I planed to use the Bivy in a mobile lean-to for shelter and burn logs in half instead of spending calories chopping or sawing them.  With the right hunting knife like a Tom Brown Tracker 1 Survival Knife, light chopping can be done.

Season 3 winner, Fowler, took a few unique tools including a Shovel, Leatherman and a sling shot although I never saw any of them giving him any advantage.  While Fowler did not take a hunting knife, his shovel was sharp for multi-purposes cutting and chopping making it a good multi-purpose tool. The Leatherman was also multi-purpose having a knife blade (he took no hunting knife), file, needle nose pliers, wire cutters (and more), which would have been handy had he taken the wire for snares.

Season 1 winner, Alan, took a 3.5 lb roll of trapping wire, which was unique but used for snare traps, where as other participants used para-cord which failed because it was easy to chew through. He also took a Water Bottle, in addition to his 2 quart pot, which was a bit unique. With the importance of water, I can see the value in this rationale.

Below is the list that I would pick; what would you pick? 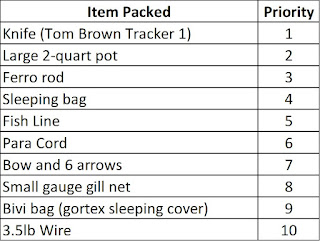 If there was no flowing or tide water, I might forgo the gill net and replace it with the water bottle.

My next step is to try using these 10 tools for a week long survival camp out to see how it works out. You might say that I'm in training for a future show.  I think it is safe to say that this is the best survival show on TV and that the $500,000 prize makes it even better. 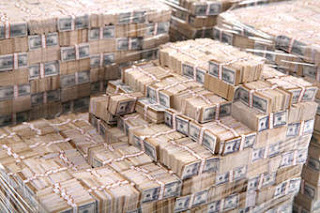 The United States has long been in favor of Free Trade because, as a leader of the industrial revolution, we were a major exporter with a favorable trade balance. Having free trade and open markets we could export into was to our advantage.  But times have changed.

Starting in the 1990's the US began to see a trade deficit. Today we have a huge Trade Deficit where we buy over 1 Billion dollars PER DAY more than we sell.  That is one billion dollars poorer that our country becomes each day and one billion dollars per day richer that foreign business men become who then buy our US businesses.  Currently they own about half of them.

Free Trade is no longer an advantage for the US as we are now the worlds largest importer and largest consumer market. The only advantage that Free Trade offers now is to the Elected Officials who get the campaign contributions from the companies that benefit from all the jobs they have moved out of the US.

Key points to consider:
So the question is who do we want paying our taxes and being less competitive:  US Companies or Foreign Corporations?

Using the 3.5% and 9.2% rates and the US 2016 trade, US Citizens paid approximately 101 Billion dollars more in tariffs than we collected. Unfortunately, no one seems to report this information. This may be the Free Trade that our special interest funded politicians talk about but it is NOT Fair Trade.

Oh, but what about trade wars???? As the biggest market in the world, the other countries need the US far worse than we need them.  But the problem is, they do not play fair. For example, when George Bush applied fair tariffs, other countries retaliated with tariffs on US Cars and Oranges.  Why these?  Because they are produced by "Swing States" Michigan and Florida in the US Presidential Election.  Americans need a tough person negotiating with these countries, not our bought and paid for political candidates in our House and Senate.

The solution is:
Problem solved.

Will there be some hiccups, yes, but often we must take one step back to take two steps forward.


For additional information see the following:

Blog Table of Contents
Posted by Prepper Handbook at 9:34 PM No comments: