In 1871, Colt introduced its first revolver models using rear-loaded metallic cartridges. These are a classic firearm that is still very popular today (and affordable), and led to many other similar designs. Understanding how to use this pistol will provide shooting skills that enable you to use many other revolver (and semi-automatic) models. 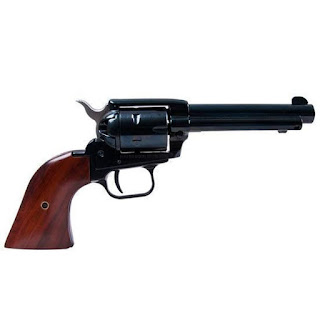 This old western revolver, is perhaps the best know pistol in history; the gun that won the west. On a very tight budget, this in a .22 caliper, is perhaps the Best Low Cost First Gun to start out, with prices starting under $150. Now a lot of people owning $500 plus guns will argue with this with very good reasoning, but ask someone who owns no other guns but this one, and most will tell you they are very pleased with it.

Revolvers have three types of (firing) "action" meaning you can shoot them one of three ways, depending on the gun design. There is 1) Single Action, 2) Double Action and 3) Double Action only.

3) Double Action only is the same as Double Action except omitting the Single Action aspect. It can only be fired by pulling the trigger.  Why this design?  Some pistols are hammer-less, so there is no hammer to cock.  The snub nose .38 caliper revolver below is an example of a hammer-less pistol that is single action only. 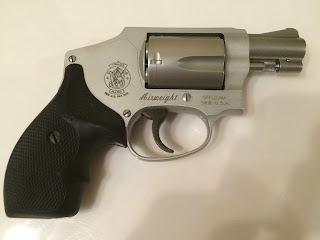 This design is ideal for pocket or purse, and the lack of a hammer allows it to be withdrawn with out hanging up during a time of urgent need.

We mentioned above that this was a .38 caliper.  What this means is that the bullet diameter is 0.38 inches in diameter compared to the .22 caliper above.  The bigger the bullet, the more it will kick (recoil), but also the more effective it is at knocking down an attacker before they can harm you.  One other factor to consider is the bullet weight which is measured in grains.  The .22 caliper at the top typically uses a 40 grain bullet, while the .38 special often has a 158 grain bullet. Broadly, there are two types of bullets:  1) Target Rounds (inexpensive) and 2) Personal Protection rounds which have more power, usually a hollow or special point and better quality materials.  There are a variety of different bullet points, with the rounded ball nose and hollow point being the main two.

Another classic pistol, the M1911, a.k.a. the Colt Government, is a magazine-fed, recoil-operated pistol chambered typically in a .45 ACP cartridge. It served as the standard-issue sidearm for the United States Armed Forces from 1911 to 1986 and is still very popular today.

Designed by John Browning, the M1911design heavily influenced nearly all modern semi-automatic pistols today. It is popular with civilian shooters in competitive events, and with law enforcement.
Understanding how to use this pistol will provide shooting skills that enable you to use many other semi-automatic models. 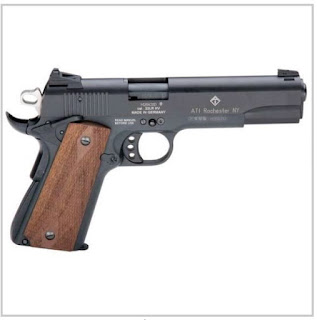 There are a variety of other pistols like the two shot Derringer (below), introduced in 1852 and named after Henry Deringer, who was a second generation colonial gun smith.  While we couldn't possibly discuss all the different types, it is safe to say that the top two probably cover 90% of the pistols in the US, with semi-automatics being the most popular. 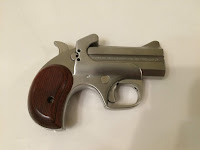 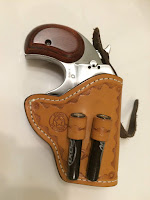 Having taught many first time shooters from over 10 countries around the world, the main problem (after gun safety) I encounter is teaching them how to Aim the gun.

The key is getting the front sight and the back sight aligned with the target. Notice on the pistol pictures above there is a sight or blade (high spot) on the end of the barrel. This is the front sight.

There are two blades on the back of the gun (rear sight), but with a slot in between them.

Most people are right eye dominate and tend to close their left eye and aim with only their right one.  Start out this way, then try each eye, one at a time, and/or both at the same time and use what works best for you. 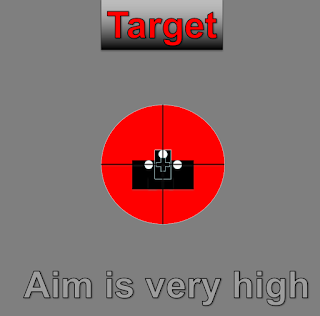 The idea is to fill the slots on the back site, perfectly with the blade on the front sight, and then have all that in line with the bulls eye.  Above you can see that the front sight (center dot) is high relative to the back sights; this will make the gun shoot high. 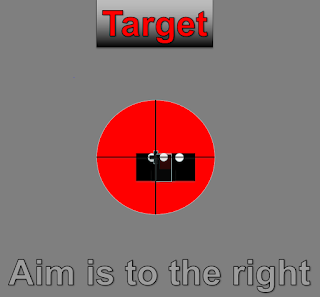 Above the sights are aligned with each other, but not in line with the center (cross hairs) of the target. 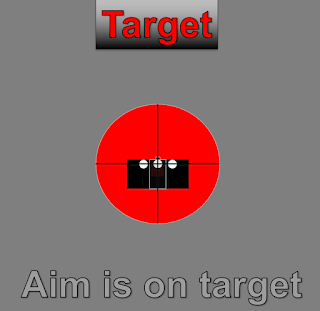 Here, the dots are aligned with each other and with the center of the target (cross hair intersection). 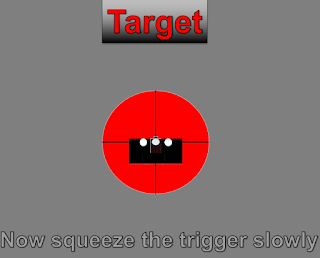 1) Take Shooting Lessons from a professional instructor
2) Always rent and test shoot any gun before you buy one.  Mistakes are expensive.

Before handling a gun, first learn Gun Safety, then be safe and enjoy shooting!

Best Handgun Selection Criteria
Active Shooter  What should you do?


Posted by Prepper Handbook at 8:17 AM No comments:

When it is time to bugout, what is the Best Prepper Retreat? Underground shelter is good against storms, radioactive fallout and is hidden, but when found, you are trapped. A nuclear missile shelter will have substantial security and while a candidate for the Best ranking, there are not many for sale.  This might be the best shelter in many scenarios, especially against a nuclear attack, but it could also be a primary target. 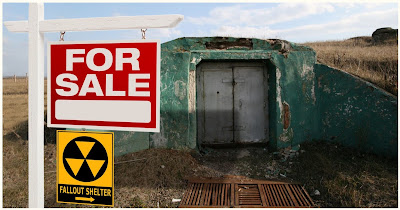 Before gun powder, a good Fort was ideal location for defending against a much larger enemy.  But with the invention of canons, being stationary meant death in a Fort. This leads to a more Nomadic Prepper Strategy.

While having an isolated  island would certainly add an element of security, you are trapped in one location.  Imagine if you could have an island you could hide or relocate. 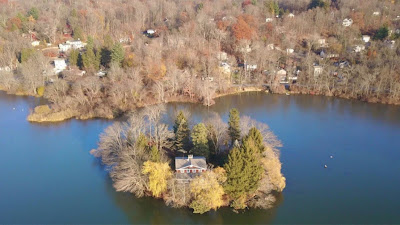 Enter the Solar Powered Sail Boat, an island on the move. 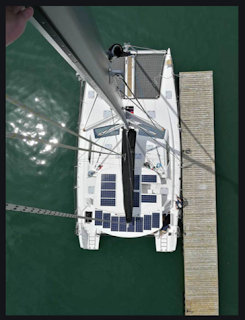 Imagine powering the fridges, the freezer, the ice maker, the fresh water maker, the water heater and the air conditioning without hearing a generator. Then, imagine taking hot showers, lighting up the boat from the masthead to well below the waterline, and never worrying about energy consumption. This can be done on the Voyage Electric 480 Electrified. Built by Voyage Yachts in Cape Town, South Africa, the 48-footer has a 48-volt, 35-kWh lithium-ion battery bank that is recharged by 16 solar panels, propeller-generated energy and a virtually silent 22-kW diesel generator. 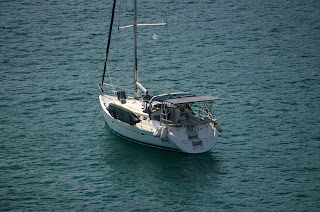 Think of the extended isolation that a family could achieve.  This makes a sail boat type water craft like this the best Bug Out Retreat, but additional preparations are necessary.

Fishing is a great way to obtain food, so add a fish finder, fishing poles, trot lines, small commercial fishing net, a small shrimp net, a cast net and lots of rope to tie the fish nets to the boat.

Because much of the diet will be fish & sea weed, having high protein foods like beans, beef jerky and beef/chicken bouillon.  Mountain House freeze dried foods with a 40 year shelf life will help supplement your fish diet.  It might be good to have a small potted plant Garden.

You should also have some form of land transportation like a bicycle, that will fit in a life boat, so you can anchor at sea, take a small boat ashore and then ride a bicycle around while on land. You should have long and short range types of communication, on the main boat, the small boat, on the land transportation, and short range on the hip of security personnel.

For Security, each adult should have an AR-15 with at least 5,000 rounds of Ammo each. Have at least one of them (preferably 2) with a thermal scope, one with a rechargeable battery. Having two allows you to have one charged at all times.  Also have at lease one really long range Rifle like a 308, a 6.5 Creedmoor or a 338 Lapua with a long range scope sighted at a distance of at least 500 yards, preferably at 1,000 yards.

Ok, maybe this is not affordable for most people, it is still the best bugout retreat, and an old sailboat restored could be just as valuable in a serious SHTF scenario.