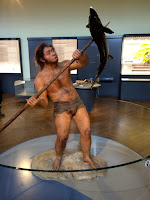 Throughout history, and in most survival situations, fish has been a leading source of protein for homo sapiens. Without fishing, man may not have survived this long.  This is one of the reasons that a majority of the human population lives within a few miles of large bodies of water or rivers.
Because of the importance of fishing, improving our skill is essential to wilderness survival. Traps, nets, fishing lines, spears and even our hands (noodling) are all viable methods of harvesting fish, and each has its advantages and disadvantages. Let's discuss some of these.

Here are some other good links on Survival Fishing:

Posted by Prepper Handbook at 6:41 PM No comments: