For over 20 years, the US has been spending over 1 BILLION Dollars more PER DAY on foreign goods than we sell/export, mostly with China and the Middle East.  T Boone Pickens called it the greatest transfer of wealth in human history. 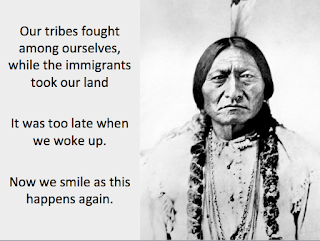 What do they do with all of these dollars?  They have BOUGHT AMERICA, with foreigners now owning more than 50% of our country’s assets and businesses. They  MUST  protect their investment, with their US owned companies controlling the Main Stream Media and brain washing the ignorant to believe and vote they way they want them to.

While they don’t say it openly, THEY ARE FOR:

1.       A One World UN Type Government; not a Free America
2.       NO Borders - free flow of immigrants to dilute the vote of Patriotic Americans
3.       Not allowing a Border Wall that 90% of the Border Patrol supports.
4.       Not allowing a Voter ID so non-citizens can vote for things that are not good for America.
5.       Not allowing a Citizenship question on the Census as they don’t want us to know how bad it is and to give more Electoral College and Congressional Representative votes.
6.       Free Trade so they can continue this massive trade deficit, bleeding America further until they own it all.
7.       Allowing Millions to be contributed to our politicians through PACS to buy votes
8.       They are opposed to media accountability so they can repeatedly lie big and apologize small IF at all, while using “un-named or un-confirmed sources”
9.       They want to change the US Constitution by putting Liberals on the US Courts to block all progress and protect illegal immigrants over the rights of Americans.
10.   Last but not Least; steadily increasing Gun Control, so there will never be a way to take our country back.   Guns protect the Rights and Freedom of the Common people, not the RICH & POWERFUL who fear and want to BAN GUNS. Remember the American Indians, Slaves and German Jews weren’t allowed to own guns.

The US Constitution gives its citizens the Right to life,  liberty,,,,, and the PURSUIT of happiness.  This means you earn it.  Forcefully taking money from people who work for it to give to others who didn’t is wrong.  If workers give their money to the needy, lazy or immigrants, it should be by choice; not force.

I believe the primary responsibility of our government is to protect our Rights, our borders; provide infrastructure for interstate commerce; to enforce the law fairly for All Americans, or to change the law so we can enforce it fairly.

History is repeating its self, and IF we don’t do something NOW, we will become the Unites States of Illegal immigrants.  Get out and vote; Become informed and convince others to vote.  The future of our country depends on us.