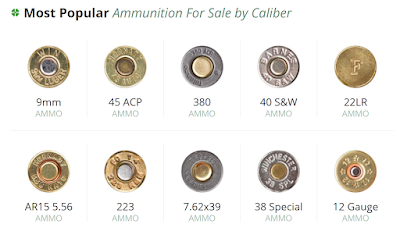 Giving (or getting) quality Ammo for Christmas is not a bad idea.  Having enough ammo to defend their family from a home invasion could be a life saver some day.  Ammo Prices are coming down, yet many calibers are still hard to find.  So if you have a few extra boxes of 30-30 or 410 (shotgun) ammo for example, giving one to a hunter friend could be a great gift.

Our 2020 Gift Ideas and Prepper Gift list are still worth considering, but with an emphasis on Ammo as a valuable gift for 2021.

Posted by Prepper Handbook at 6:47 PM No comments:

Build your own AR

From Cheaper Than Dirt:  https://blog.cheaperthandirt.com/definitive-guide-building-ar-15/

This is a complete list of everything you need to build an AR-15 rifle. Underneath each component is a suggestion of products the Cheaper Than Dirt! experts use or have used in the past on various builds for DIY ARs.

Of course, our recommendations are not exhaustive. There are so many different ways to configure an AR-15, from mass-produced cheap polymer lowers to mom-and-pop shops machining custom competition, match-grade parts.

Each AR-15 build is going to vary, depending on your reason for building the rifle. Be it a 9mm carbine, destroyer of pigs, long-range precision or simply just a fun firearm, this guide will lead you in the right direction.

The 27 Parts Needed for DIY ARs

Here’s an infographic that quickly shows the parts needed to build an AR. Read more details about each component below (or click here to skip the infographic).

To assemble the AR-15 stripped lower, you will need 31 different parts, including the trigger, bolt catch, springs, pivot and takedown down pins, selector switch and hammer. The most convenient way to get all of these parts is by purchasing a full AR-15 lower parts kit.

The kits include all 31 items, including a pistol grip and trigger. However, some items you will probably want to discard from the pre-packaged kit and purchase as separate upgrades.

Here’s an example of installing the pivot pin:

Located behind the trigger guard and at the back of the rifle is the pistol grip. You grasp this with one hand to aid in shooting the rifle. A basic pistol grip is usually included in the lower parts kit, but many find aftermarket grips fit their hand better.

Here’s a video example of installing the trigger guard:

The fire control group consists of:

You may use a fully contained trigger unit or individual parts. Fire control group parts are included in the basic lower parts kits. Our experts like to replace the standard trigger group with a match-quality trigger.

Here’s an example of installing the fire control group:

The selector is the safety switch and is included in a basic lower parts kit. Left-handed and ambidextrous selectors are available for DIY ARs.

Here’s an example of installing the selector and pistol grip:

The bolt catch stops the bolt from traveling forward when the magazine is empty. The standard lower parts kit includes a  basic bolt catch.

Here’s a video example of installing the bolt catch:

The buffer slows down the bolt on the AR-15, absorbs recoil and reduces wear on the rifle. Buffers come in two different sizes, either rifle or carbine and in four different weights from lightest—the standard—to the heaviest, called an H3 buffer. For an AR-15 chambered in .223 Remington/5.56mm NATO, use the heaviest buffer that allows your rifle to function and consistently lock the rifle’s bolt back.

The type of stock you chose for your AR will determine the size of the buffer you buy. For an A1/A2 fixed stock, purchase a rifle buffer. For a collapsible or adjustable stock, buy a carbine buffer. If you are building your AR in 9mm, you will need to buy a 9mm-specific buffer assembly.

Here’s a video example of installing the buffer tube:

The buffer spring brings the bolt of the rifle forward, allowing the gun to fire follow-up shots. Rifle stocks—A1 and A2—as well as carbine buffer springs, are different sizes.

To learn more about AR-15 barrels, read “AR-15 Barrels 101.” There are a number of different barrel lengths, twists and caliber available for DIY ARs.

The gas block directs gases from the barrel to the gas tube and back into the AR-15’s receiver, allowing it to complete the cycling process so another round will fire.

Gases are directed from the gas block to the bolt carrier via the gas tubes. Gas tubes vary in length, coming in rifle, mid-length, carbine and pistol lengths.

The AR-15 upper receiver holds the forward assist, spring and pin, the ejection port cover, the charging handle, barrel and bolt carrier group. There are many choices when it comes to putting together your upper receiver for DIY ARs.

The upper receiver parts kit includes the ejection port door, spring, forward assist parts and sometimes the charging handle. It typically does not include the bolt or carrier.

AR-15 stocks are either adjustable or fixed. Depending on where you live, an adjustable or collapsible stock is illegal. The AR-15 stock goes on the back of the rifle and allowing you to shoulder it.

The handguards go around the barrel of the AR-15. It is where you can add accessories and grip your rifle. Handguards are also referred to as the forend, foregrip or forearm. They protect your hands from burning on a hot barrel.

They also are either smooth or have rails on them. Handguards serve a valid function, however, and many people buy them purely on their aesthetic value.

AR-15 upper receivers come in two different types, either an A2 or A3 (flat top). Its fixed carry handle with integrated iron sights characterizes the A2 upper receiver.

The handguard cap secures the front of standard handguards. It is not needed on free-float handguards.

There are two types of muzzle devices. You may put either a muzzle brake—sometimes called a compensator—or flash suppressor/flash hider on your rifle.

The muzzle brake helps reduce recoil and muzzle rise while the flash hider suppresses the visible flash from the barrel when the rifle is fired. Some states restrict flash suppressors for DIY ARs, but may allow muzzle brakes. Check your local laws before ordering.

Optics for the AR-15 include traditional riflescopes with magnification or electronic red dot and non-electronic illuminated sights that offer no magnification.

“Extras” include things such as sling mounts and attachments, vertical grips and tools.

For instructions on how to install these parts, watch these videos from “Building Your AR Lower Receiver.”

Posted by Prepper Handbook at 8:07 PM No comments: