The fundamental NRA rules for safe gun handling are: 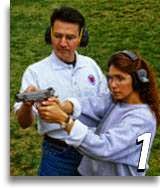 1. ALWAYS keep the gun pointed in a safe direction.
This is the primary rule of gun safety. A safe direction means that the gun is pointed so that even if it were to go off it would not cause injury or damage. The key to this rule is to control where the muzzle or front end of the barrel is pointed at all times. Common sense dictates the safest direction, depending on different circumstances. 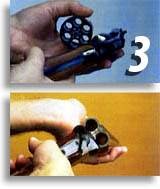 3. ALWAYS keep the gun unloaded until ready to use.
Whenever you pick up a gun, immediately engage the safety device if possible, and, if the gun has a magazine, remove it before opening the action and looking into the chamber(s) which should be clear of ammunition. If you do not know how to open the action or inspect the chamber(s), leave the gun alone and get help from someone who does. 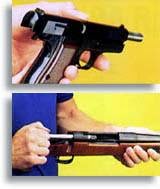 When using or storing a gun, always follow these NRA rules:
A gun brought out of prolonged storage should also be cleaned before shooting. Accumulated moisture and dirt, or solidified grease and oil, can prevent the gun from operating properly.
Before cleaning your gun, make absolutely sure that it is unloaded. The gun's action should be open during the cleaning process. Also, be sure that no ammunition is present in the cleaning area.

Below are some attributes of the various types of guns to be familiar with.

In the preceding pictures were some good examples of various gun examples: