This Season, the 10 contestants were selected from previous 4 show participants, so they have Alone experience and should make better choices in what gear to carry.  In addition to some common necessities (like clothes and tarps), they get to pick 10 personal items to carry with them. 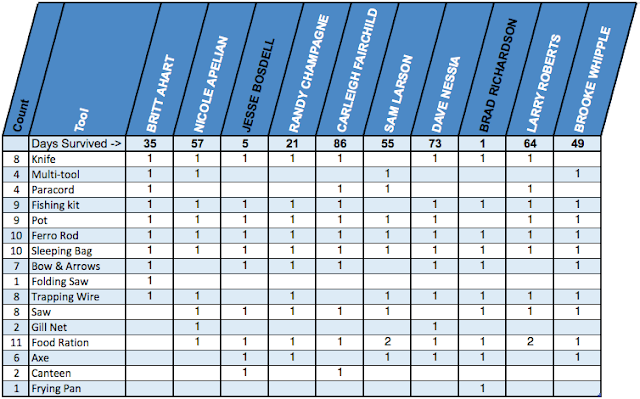 All ten participants chose a sleeping bag and ferrous rod. Nine selected the fishing kit with 25 hooks and fishing string and a cooking pot, although the tenth participant chose a frying pan.  Nine also chose a saw. .

If we compare this to the list of things the past winners packed, we see a few differences.
Para cord was used by about 80% in the past, but only 40% this time.

In the past, the bow and arrow was selected by only about 10% - 20% of the participants, but this time 70% are taking a Bow and Arrows as this area has more large animals than the previous season locations.  The ability to get a large animal through bow hunting or trapping will be a game changer and determine whom the winner is.

Only 2 chose a gill net, which has been one of the most productive food sources in past shows/locations.

Who do you think will win this Season 5 event? Is the participants past performance an indicator of how they might do this time?

86 days - Carleigh lasted the longest on the Season 4 show of any participants this Season 5 at 86 days, which would have likely won the previous seasons, making her the odds on favorite to win this one, but she may be suffering from PTSD from her first episode on Alone, as she is breaking down crying a lot. Note she did not quite but was forced out due to health risk/concerns; so she is tough.

73 days - Dave was forced out of Season 3 at 73 days due to health risk/concerns, despite having 33 dried fish halves preserved for food. This could have carried him for another 33 days or more, making him the clear winner. Dave can win this season because he has the skills and mental attitude to be successful.

64 days - Larry Roberts quit after 64 days on the season 2 show due to hunger.

57 days - Nichole quit after 57 days on Season 2, despite catching more fish than anyone else, but didn't dry and preserve them for future needs. But how much of her abundant fish supply was luck of the draw, getting a hot location? She also had an excellent knowledge of edible plants.

55 days - Sam Larson lasted 55 days, until his food supply of mice ran out. He went with a minimal shelter and conserving calories strategy. This approach can work for short competitions, but not long ones.

49 days - Brook Whipple and her husband lasted 49 days, but she will be "Alone" this time and survival will be much tougher.

Anyone who couldn't last longer than these has little if any chance of winning.