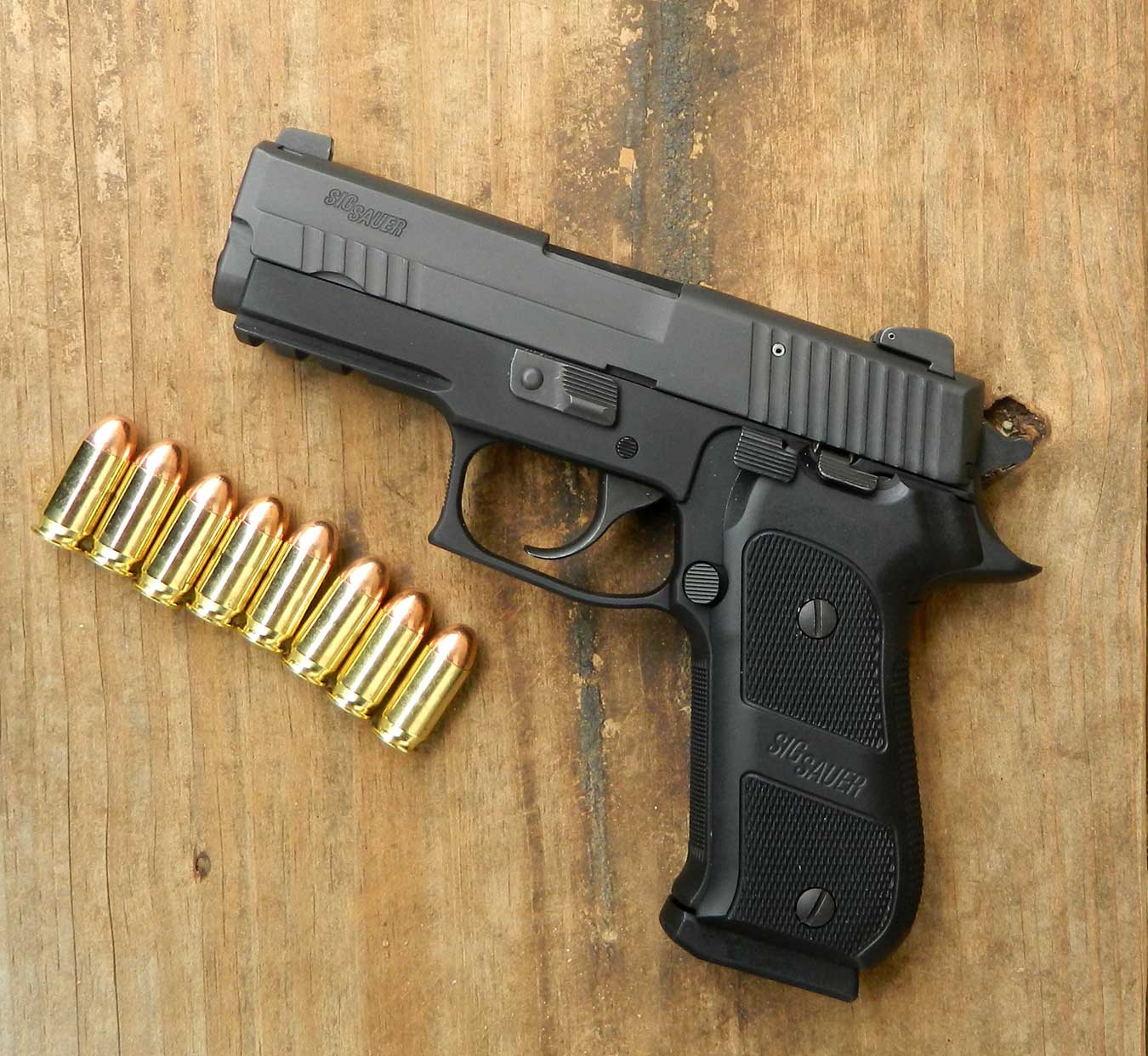 The most dangerous places are outside the home. Inside the home, we have barriers including outer doors, glass, and hard interior doors. Hopefully, the family has your back, and you have a plan. If not, you have more problems than I can address. Illegal narcotics, and the pharmaceutical industry’s greed-fed opioid epidemic, turn many against their fellows, and the family is the first victim—just so you will not be surprised. My home is modest, and I have genuine affection for my neighbors. I am lucky. My first line of defense is an early warning system named Lucy. She is a rescue dog, an American Dingo sometimes called a Carolina Dog or Pariah dog. She is 55-pounds of love, loyalty, and fine-tuned senses that serve to alert us of movements around the neighborhood.
Above is a SIG Sauer handgun and several rounds of ammunition.
A good quality handgun and ammunition is important, but just one level of home defense.

Many liberal doctrines have given every advantage to the burglar. However, the courts have held that the need for self-defense is more apparent in the home. The Castle Doctrine, defining the right of citizens, outlines that there is no need to retreat from an attack in the home. This is a return to the doctrine of the King’s Peace that is fair and just.

All prepared Americans should have a good grasp of the law. We should also be prepared. My experience as a trainer indicates that more Americans keep a firearm at the ready in the home than carry a handgun concealed.

The concealed carry permit holder may own but a single handgun. The concealed carry handgun is a compromise of power, weight, size, and control. While pistols such as the Glock 19 9mm are fine home defenders, the snub nose .38 and compact slim line 9mm pistols may be less than ideal by comparison.

Any reliable handgun is better than a broom handle, but there are good choices that should be examined. A full-size revolver and proper loads make for a formidable home-defense handgun. The revolver may be braced against a door jamb for greater control and will deliver its load into a single ragged hole at 7 yards. If you carry a Commander .45 or SIG P227 as I do, then the carry gun simply becomes the home defense gun.

A good program many shooters are following is to carry the handgun at all times when at home. A study of time and motion indicates that this is a good course. A home invasion, despite your best preparation, will be a surprise. A shotgun in the closet or a handgun under the mattress is worthless when you are in the kitchen.

A firearm in every room—which some of my cop friends find suits them well—simply serves to arm the burglar that invades the home when you are absent.

The guns not actually being deployed should be in the safe. A counter argument by my friend Sid is that if you have a safe in the house, the burglar will return, place a gun to your head, and you will open the safe.

While I respect Sid’s opinion, I think it is mostly millionaires who have the worry of being concerned about such sophisticated thieves. The Hornady RAPiD safe is the ideal storage place for handguns, rifles, and shotguns that may be needed at a moment’s notice. As for myself, I have adopted a rather reserved program that works for me.

The carry gun, usually a Les Baer or Kimber .45 these days, is kept at home to be ready when I return from my daily chores. For moving about the home, mowing the lawn, and other chores, the snub nose .38 is kept in the pocket. This solves a lot of problems. It is my choice, and it works for me.

The .45 is still the dedicated home defense gun; I simply have something extra. It seems odd that the weight of the 1911 never bothers out of the home, but when typing and working at home it does. Each has to determine their personal preferences. In practically every waking moment, I am armed. The pistol under the coat, in an IWB holster, or shoulder holster may be a .357 or .44 revolver, or a 10mm or .45 caliber self-loader.

When I am asleep, the carry gun is near my hand. In my youth, and as a peace officer, I observed a common ready mode that was nearly always taken by widows and other ladies. A .32 or .38 revolver was kept under the pillow at night. I am not recommending this, but it seemed comforting for my grandmother after my grandfather passed. Considering the number of women that have been awakened by a burglar or rapist at the foot of the bed or even in bed with them, this ready mode made good sense. Thus, a rifle in the corner isn’t the best answer for such attacks.

For those with a more defined concern, such as a takeover robbery, a rifle might be the answer. Those living in the back forty, who sometimes get into fights with feral dogs or wish to dust off predators, may wish to keep a versatile rifle handy.

The 5.56mm carbine—with proper loads—is one choice. As of today, I am seeing second- and third-quality AR-type rifles selling for less than $500. Good quality rifles, such as the Ruger AR-15 is selling for less than $700. ($622.15 on cheaperthandirt.com at the time of this writing) This price makes it easier to recommend the AR-15 rifle for home defense.

Another good home-defense long gun, the M1 carbine, is becoming increasingly difficult to find (in good examples). If you have one, confirm its reliability, and load it with the Hornady Critical Defense .30 carbine load. I cannot imagine a better home defender.

These rifles will give you an advantage against a takeover gang or marauding dog packs. There are some valid concerns with over penetration, but the primary means of avoiding over penetration is to hit the target. The Hornady .223 55-grain V Max, as an example, will exhibit less penetration than the typical 9mm or .45 caliber handgun, and it has greater predicted wound potential. The SIG Sauer Elite .300 Blackout hollow point was recently adopted by a good friend. Thus far, the reports from his testing shows this is a good home defense loading.

Sporting guns may be pressed into service for home defense. A .22 Long Rifle self-loader is a common home defense load. There are many files on this rifle, and it has generally been successful. The primary concern is reliability with the heel-based bullet and inside priming of the rimfire cartridge. While it is not the preferred cartridge for most, the .22 LR may be all that is available, and it will serve if properly delivered in double and triple taps to the arterial region.

Whatever the firearm chosen, the piece should be proofed for reliability. While the long gun is a formidable firearm, be certain of its handling under stress. Carrying a child in one arm, moving with the firearm, or using the cellphone to call 911 makes for complicated gun handling that should be practiced.

A weapon-mounted light is an aid in home defense provided the user is skilled in its use. I like the advantage of a light that isn’t attached to the firearm as well. You will search more often than you will engage an adversary. Aiming the light slightly to one side of an object (such as a door jamb) makes for greater visual clarity and less glare. Properly illuminating an object in a modest-sized room may be accomplished by aiming the light toward the ceiling.

While I do not like gadgets for their own sake, my worst-case scenario rifle is well equipped for every problem. The Colt SOCOM is fitted with a Redfield Battlezone scope. This rifle is my test bed for ammunition performance. In the home, it is often loaded with the Hornady V Max. The rifle is fitted with a LaserMax Uni Laser in order to give the rifle utility in home defense. I have practiced looking over the top turret of the scope and results are good to 15 yards—far beyond a home defense problem.

The shotgun is a superior home defense firearm provided the user takes the time to learn to handle the recoil and power of the shotgun. The Remington 870 is among the fastest handling and most reliable shotguns of all time. A modern AR-15-type stock with a forend that will accept a combat light seems a good modification for those who practice.

I prefer the easy handling of the standard riot gun. However, when the shotgun is used with slugs and accuracy becomes more important, a rifle-sighted shotgun with improvements is a viable option. As an observation, I have never seen a riot-type shotgun used for home defense. I have over a dozen files in which homeowners successfully defended themselves and their family with a standard-length sporting shotgun. If that is what you own, then you may have the perfect home defender in a shotgun you are already familiar with.

The often-touted frangible bullet handgun loads are something I never choose for personal defense. Cycle reliability in self-loaders may not be ideal, and the reduced mass and penetration of these loads leaves the user with a serious deficit in penetration. After many years of testing ammunition and studying wound potential, I find that frangible loads lack the necessary penetration to prove effective.

The best choices for home defense are usually middle-of-the-range bullet weights with good quality control. The Hornady Critical Defense load is among these. The balance of penetration and expansion is ideal for most uses. Be certain to proof the firearm with the load of choice. Stick with proven firearms that have demonstrated good reliability, get training, and avoid odd ideas that cannot survive a climb up the logic ladder.

What is your go-to home defense gun? Have you adopted 24/7 carry, including while at home? Share your answers to these questions or home defense tips in the comment section.

Bob Campbell is a former peace officer and published author with over 40 years combined shooting and police and security experience. Bob holds a degree in Criminal Justice. Bob is the author of the books, The Handgun in Personal Defense, Holsters for Combat and Concealed Carry, The 1911 Automatic Pistol, The Gun Digest Book of Personal Protection and Home Defense, The Shooter’s Guide to the 1911, The Hunter and the Hunted, and The Complete Illustrated Manual of Handgun Skills. His latest book is Dealing with the Great Ammo Shortage. He is also a regular contributor to Gun Tests, American Gunsmith, Small Arms Review, Gun Digest, Concealed Carry Magazine, Knife World, Women and Guns, Handloader and other publications. Bob is well-known for his firearm testing.

To view the original post with all the pictures visit:  http://blog.cheaperthandirt.com/home-defense-preparation/

Posted by Prepper Handbook at 9:30 AM