Obviously the solution is not to ignore US Immigration Laws and let anyone come and go at will.  We must control our boarders to prevent Terrorist from entering freely.

At the same time, it is equally obvious that deporting all illegal immigrants is not a solution.  In fact, if all illegal immigrants immediately left the US, we would see a significant recession as a worker shortage brought our country to its knees.  Lets face it, lazy Americans are not going to do the hard jobs that are often performed by immigrants like picking crops; at least not until it pays more or living on welfare is not an option.

So can we all agree the solution is somewhere in the middle?

When it comes down to it, only the Indians as they are often called, are Native Americans. In fact, we are all immigrant descendants.  So where do we start solving this problem?

We must first start by stopping the flow of more illegal immigrants.

Once this is solved, then, and only then, we address the illegal immigrants already here. 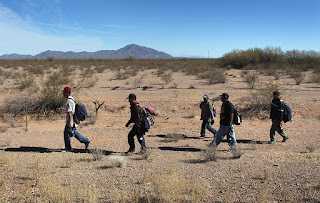 A wall is expensive and may not work, but requiring the use of E Verify for all new hires (not existing ones) and implementing employer fines of $50,000 for each illegal immigrant hired & enforcing it will significantly reduce the flow of illegal immigrants coming in to the US.

Illegal immigrants already working in the US, paying income taxes for the past 2-5 years, not on any form of welfare and no criminal background, will receive a multi-year green card (not citizenship) and are temporarily exempt from deportation along with their immediate law abiding families.  They will be allowed to apply for citizenship like any other immigrant but receive no special consideration just because they broke our laws.

Will there be some sob stories on the news and protests? Yes, the solutions to difficult problems are not easy or they would have been fixed already.  Every illegal immigrant who violently protests or commits a felony, should be immediately deported and never eligible to legally return under any circumstances.  Peaceful protests are 100% acceptable!

Over time, those that are a burden to our country will go home because they won't be able to get jobs or welfare....others will stop coming.... problem solved.  Those that remain will be hard working, tax paying, law abiding American citizens; something our country needs more of.

Posted by Prepper Handbook at 5:42 PM