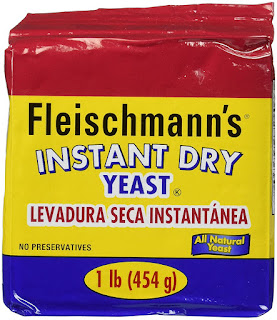 Which ingredients you use and their combination will affect the taste and texture. But what is the real difference?

Yeast is a little organism called a fungus, that when activated, consumes the sugars in flour and releases carbon dioxide as waste. When making a traditional (“slow”) bread, you combine it with flour, sugar, some liquid and other ingredients. When you knead the dough, the proteins inside form a stretchy matrix called gluten. This matrix traps the little gas bubbles produced by the yeast. Without a leavening agent like yeast, you'll end up with a dense blob that works better as a building material instead of bread.

The yeast produces gas when you let the dough rest for a while after kneading, and then expands again once heated in the oven. Once your ball of gas-filled gluten gets hot enough, it sets into the spongy, fluffy structure we call bread.
You'll notice that baking bread takes a while due to all of this waiting for yeast to work. We have some faster alternatives that instead rely on a chemical reaction between an acid and base to produce carbon dioxide.

Baking soda is sodium bicarbonate. It will react with a liquid, acidic ingredient to produce carbon dioxide. You can see this for yourself by adding a bit of vinegar to a little baking soda in a small bowl. It will start to fizz immediately after adding the vinegar. Because the reaction is so fast, foods made with baking soda must be cooked immediately after mixing. For instance, pancakes made with baking soda will come out tall and fluffy if you can get it onto the griddle right away. However, if you let the batter sit for a while, say 30 minutes, they'll come out dense with a gummy center since the gas was lost while sitting. Baking soda also adds flavor and color to pancakes, muffins, and cookies by hastening browning.

Baking soda (aka sodium bicarbonate) is said to have an infinite shelf life, but after you've had it for a few years you should test to make sure it hasn't lost all its potency. Unlike baking powder, baking soda only reacts when you add an acid to the solution.

Baking powder usually has a shelf life of about 9 to 12 months. Testing it is super easy. Just stir about half a teaspoon of baking powder into a cup of hot water. It will immediately start to fizz and release carbon dioxide gas if it's still fresh enough to use. This trick should work with both single- and double-acting powder.

When baking bread, 2 cups of sour dough starter are the equivalent of one (1) table spoon or packet of modern dry yeast which is sufficient for a loaf made from 3-4 cups of flour.  To make waffles or pancakes, just use the proofed sour dough starter after it has risen to its peak.