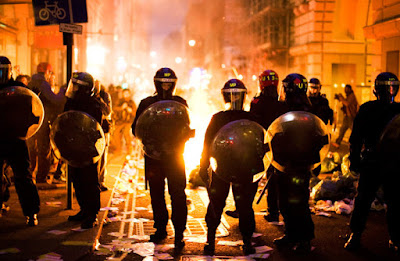 Lets start by Categorizing Catastrophic Events to put them in perspective:

An Asteroid Strike, Nuclear Winter,  EMP or a Solar Flare would likely cause a total collapse of our country civilization.  Such an event could be classified from Level 3 to Level 9, but a more likely scenario would be a temporary Partial Collapse that would be from an event in the Level 1 to Level 3 range and which might include things like:
More common events like Winter Storms, Hurricanes, Floods and Power Outages can cause regional breakdowns, but help will soon be on the way.  These are Level 1 events.  Where the really serious problem starts is when the domestic "Help" is also incapacitated and won't be able to come.  This quickly escalates an event classification by one or more Levels.

Realistically, most Preppers can only afford to prepare for things in the Level 1 to Level 4 scale.  The preparations or these events are similar except for how long you need to prepare for, how much water and food you need and how much seed & land for longer term events.

This is where our Step by Step Prepper Plan comes in handy. The more you follow the plan and repeat the cycle, the better prepared you are for longer and more serious events.  Once you get to the point where you have a 1 - 2 year supply of food, seed, tools for a Prepper Garden, Livestock and extra supplies to Barter then you are ready to start working on an underground shelter with Solar Power. There are a number of sources on this, and some group retreats have them included.  The more catastrophic Level 5 and higher events will likely require a substantial investment to survive underground.  Nuclear preparations are well documented and information is readily available and not expensive.  www.ki4u.com has lots of good nuclear info, products and links to even more.

Below is a picture showing the before (bottom) and after (top) effects of an 18 kilo tonne (kt) nuclear bomb that was dropped on Hiroshima Japan. The nuclear bomb sizes last published were 200,000 kt, or 11,000 times more powerful.  Likely nuclear targets for the US include Washington DC, Houston, New Orleans, New York, Chicago and Los Angles plus other large population centers. 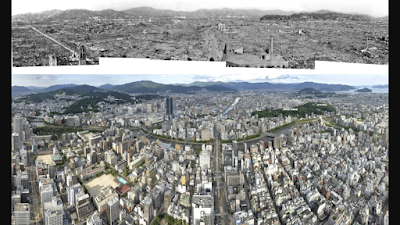 The devastation is major but primarily on the surface.  Radioactive fall out is likely to kill just as many as the blast.

After having your preps in order, getting to your retreat early is a key.  Recognizing the RED FLAG warnings that it is time to bug out is important.  Short term Level 1 events can be dealt with in the city, with a good Urban Plan.  Sustainable City Survival is possible if well prepared, but chances are lower than in the country.  Knowing what to expect in urban areas will help.  Country dwellers should expect to be swarmed with city gangs desperately seeking food and water.

Once you are well stocked, you need a security plan to protect your supplies and loved ones.  Here are some links to read about security:

See similar topics by clicking on the labels below

Posted by Prepper Handbook at 9:11 PM