With our population growing exponentially, the earth is becoming infested with Homo Sapiens yet throughout history, Mother Nature had no problem keeping things in balance. 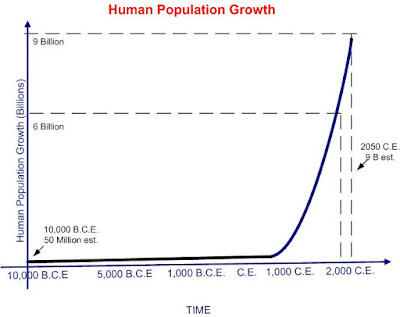 It is unlikely that humans can control population growth which will leave it up to Mother Nature.  But how will she do it? Don't think she won't; it's only a matter of time.

In the past, the increase in the population of natural predators was an effective control, but currently the only predator for humans are other humans.  So a violent uprising is a possibility.

Starvation from crop failures or food shortages  or another catastrophic event is a possibility, perhaps a Solar Flare or Mass Coronal Ejection sending an EMP from the Sun to the Earth causing a long term Power Blackout.

Another likely option is a Pandemic.  With the abuse of antibiotics, biological warfare research and increasingly resistant germs, this possibility increases each day.  Infertility, is another possibility....  as humans become unable to conceive.  The rise of homosexuality may be a leading indicator of this.

Some suggest that Homo Sapiens will be the cause of their own extinction, either through genetic engineering, climate change, pollution, nuclear war, or artificial intelligence.  With our massive growth of scientific knowledge, these options increase each day.

What do you think will get the human population under control?

Posted by Prepper Handbook at 9:59 AM