Three contestants must survive with no tools; just the clothes on their backs, in a harsh environment for 30 days with one animal.  This will test their primitive skills and ability to use Stone Tools. 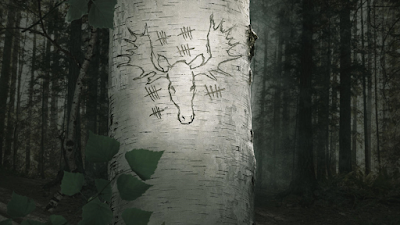 S1 E1
Our first episode opens with Zane Kraetsch, Lindsay Persico and Joe Schilling begin locating their beast which turns out to be a moose.  They begin to fabricate stone tools to process the moose meat, but their available stone seems limited.  Doing the best they can with stone tools, they begin skinning and gutting the moose.  Lindsay takes the lead gutting the beast to allow it to cool, as Joe heads off to make a small shelter of evergreen boughs.
Day 2 has Joe coughing and Lindsay trying to quarter the moose as Zane begins to build a smoking rack.  Joe’s coughing intensifies and he is soon no help to the team.
The next day (3), Zane begins to build fire using moose hide as cordage.   After 7 hours, he uses Witches Hair, growing on trees as a powder under the spindle and quickly gets fire, demonstrating the importance of using the right materials.
They use the moose stomach as a water carrier and  pot for hot rocks to disinfect the water.   Lindsay and Zack are working well together now but Joe is only resting and actually being more of a burden than help.  When he taps out on Day 3, actually looking strong, the team is actually better off.
Day four finds them using the moose hide as a cover, the remaining team of two begins to smoke the meat as the temperature gets down to 28F during the night with a light snow.  The next day, they continue drying meat but also reinforce their shelter.  During the night, they awaken to a bear growling outside their shelter and Zane is missing his kiddos.
Day 10 opens with a light snow covering.  The team has abundant meat when Zane quits for no apparent reason, except perhaps a lack of mental toughness.  Leaving a woman out their alone was clearly unexpected to her.
Avoiding the bear, a tough Lindsay drags the moose remains further away. At this point, she has lost 10 pounds as the nights are getting down to 28F. With the bear still coming close to her shelter, she decides to relocate her camp, leaving her shelter behind on day 17.  She uses a Birch log and a Chaga fungus that grows on hard wood trees to carry her fire.   Leaving her shelter is risky, but staying might also be even higher risk.  One potential mistake, is she should have put a large log on her old fire as a back up to carrying her fire with her.  But it was not an issue for her as she was able to rekindle her fire.
Day 18 begins with building a new shelter in 32 degree temperatures.   Run down and light headed on Day 23, finds her struggling to eat the low fat dried meat so she decides to go hunting using the moose shoulder scapula as a throwing weapon and killing a grouse, carrying her to extraction day.

Summary:
Lindsey Persico, is the lone survivor in this episode, proves to be tough, smart and a hard working, who was able to process large quantities of meat and harvest a grouse.