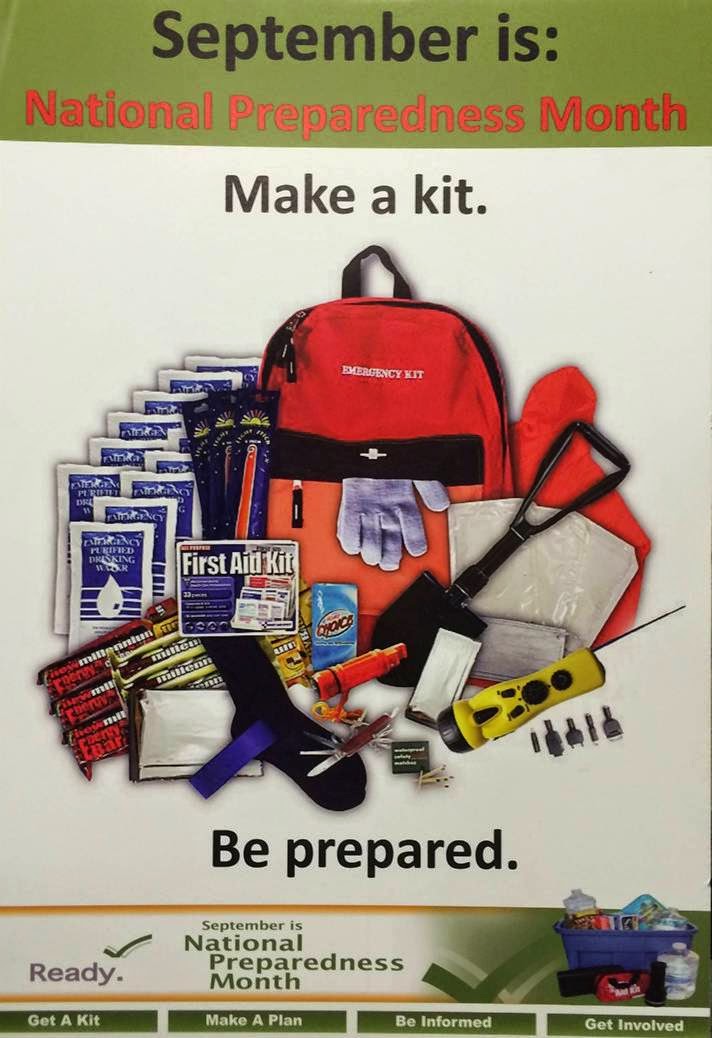 Our federal government gives us a list of “Events” we should be prepared for and how to do so. It includes things like:

All of these are covered in the Prepper Handbook in detail.

These are not Chicken Little (http://en.wikipedia.org/wiki/Henny_Penny) saying the sky is falling, but rather our federal government (http://www.ready.gov/be-informed) telling us what we need to be prepared for.  The government even has “National Preparedness Month.”
These are Events that often happen. Obviously some are more of a risk than others are, depending on where we live and our situation. Those identified by * are “Events” that could happen to most anyone.
In addition to this list, I would add:

Riots, gangs, and looting that might occur for a number of reasons including something as simple as the LA Lakers winning the NBA Championship or as complex as an economic meltdown from hyperinflation (read Wikipedia on this subject).
These “Events” as we will call them can cause a wide range of event consequences. The degree of severity depends on the Event AND our level of preparation for it. The range of Event consequences broadly includes:
How prepared you are will determine how you fare. For example, being prepared for an Event can easily move you from serious hardships (#3) to minor inconvenience (#2).
But there are real risks of far more serious Events. Is there any doubt that one of the many suicide bombers would not discharge a weapon of mass destruction in the USif he could get one? Only 5% of the millions of daily import containers are inspected. Getting something smuggled into the US would not be hard. When Terrorist attacked us using airplanes on or 9-11 they did so with 4 different airplanes and totally successful with 75% or 3 out of 4. If they tried to smuggle in 4 nukes from North Korea, Iran (formerly Persia) or lost ones from Russia through our normal import shipping channels to attack us with, our chances of catching all four is about 6 out of 1 million. Of course, they would test our different ports (if not already in progress) to see which ones were the easiest to smuggle illegal products into and would use those, reducing our chances even further.

The US has a Billion plus dollars per day trade deficit (over spending) with much of it going for foreign oil which has a little more cost than pumping water from the ground and transporting it. This provides a lot of disposable income for the oil rich countries to buy nukes from India,Pakistan,North Korea, or the former Soviet Union countries, most of which hate the US.
Sure, North Korea missiles only have 2,000-mile range, but the EMP caused by a nuke launched from a fishing boat or submarine in the Gulf of Mexico and exploded 250 miles over the central US would take out a majority of our electronic and electrical systems for many years. A solar flare from the sun could do the same thing. Expert testimony before Congress in 2014 warned us that an electromagnetic pulse attack on our power grid and electronic infrastructure could leave most Americans dead and the U.S.in the dark ages. Google “EMP Attack On Power Grid Could Kill 9-In-10”
Think of the consequences from having no electricity for years especially in a country where farmers representing 2-3% of the US population are feeding the other 97 – 98% (300 million Americans) and much of the world. Or what if honeybees continue to die off and even perish? The food supply will quickly be disrupted from not being pollinated. People will do what ever is necessary to eat and feed their children. First they will ask for food, even beg. Then they will try to sneak and steal it, then eventually organize into groups (gangs) and take it by force if necessary. They will have no problem killing “greedy people who won’t share” to feed their children.
Without electricity, city water supplies will quickly dry up. Hoards of desperate people will flee to the country in search of food, water, and shelter.
The US Government has a Continuity of Government plan (COG) called Continuity of Operations (COOP) that believes the highest value terrorist target would be to detonate a Washington DC nuclear bomb while the President was addressing joint sessions of congress. So clearly, they recognize there is a real risk, if they are developing plans on what to do in such an Event. An Event that most people are not prepared for I might add. Some of their plans for different Events are shocking, expecting mass casualties of unprepared citizens.
There are a large number of Events with a low probability of occurrence, but severe consequences. A major volcanic eruption or limited nuclear exchange could spread enough dust through our atmosphere blocking out the sun and inducing a multi-year winter and disrupt the food supply. Read about 1816, the “Year Without a summer…. was an agriculture disaster.”


Fortunately for us, the basic preparations are generally the same for most of the Events, with a few specialized additions for each Event.
This is another excerpt from the Prepper Handbook  by JR Ray on Amazon.  You can download their free e-reader and read it on your computer, iPhone or iPad.

Here is another good story on EMP:
http://www.foxnews.com/politics/2015/05/04/military-eyeing-former-cold-war-mountain-bunker-as-shield-against-emp-attack/

Posted by Prepper Handbook at 9:14 AM