The short-barreled double barrel shotgun with hammers is often called a coach gun or side-by-side shotgun.
This type of shotgun was once the preferred weapon to guard stagecoaches. Many years before the type was used in the Old West, the coach gun was used to guard European coaches from dangerous highwaymen. This coach gun was at times called the Blunderbuss.
Coach guns are formidable shotguns capable of defending the home. The pump shotgun and the self-loader are more complex, more expensive, and more difficult to train with. There is nothing simpler than the hammer-fired double-barrel shotgun save a single-shot shotgun.
I have seen many double-barrel shotguns at ready in the home or on the farm, and they are capable of dispatching unwanted pests and varmints as well as members of our protein fed ex-con criminal class. A different variant, the double-barrel striker-fired shotgun, was used by New York City cops until at least the 1970s.
The double barrel with two loads of buckshot was ideal for taking dangerous felons at gunpoint. With a powerful firearm and an instant second shot, coupled with excellent handling qualities, these shotguns filled a real need. A correspondent tells me his western police department kept double barrel shotguns in 20 gauge until at least the 1980s along with pump action 20 gauge shotguns. At close range making felony arrests in tight quarters, I am certain these were formidable firearms. The double barrel shotgun is an excellent all around shotgun for defense use and ideal for many of us.
For personal defense, the double barrel handles quickly and points well. It isn’t well suited for tactical use by special teams, but for home defense the double barrel, particularly a short barrel coach gun, is ideal. Everyone’s budget and circumstance do not allow purchasing an expensive defensive shotgun. The double barrel is simple to use well. Simply break open the action and load the shells then close the action. To fire, cock the hammers and pull the trigger.
Each hammer is cocked individually. You may wish to cock them one at a time, or both at once in anticipation of firing. The modern Century Arms double barrel coach gun also features a handy tang mounted safety. I like this safety for use once the hammers are cocked; it is a good feature when moving in the home. Real safety is between the ears and involves keeping the finger off of the trigger until you fire. I recommend cocking only one hammer at a time until you are very familiar with the shotgun.
The double barrel shotgun offers a formidable deterrent. From the images of old west guards riding shotgun on a stagecoach to the modern hammer-fired double, the double barrel has an unmistakable image and the threat of a double charge of buckshot. The modern hammer-fired double barrel has the advantage of simplicity.
The double barrel is also easy to train with. Another advantage is that with two loads, you can stage the load. A lighter load first and then buckshot for problems inside the home. The load may be changed quickly if the problem is a dangerous animal such as a rattlesnake just outside the door or a predator such as a coyote farther away. For those in an urban setting, the shotgun with proper loads makes for a good Brooklyn special. It is politically correct and legal where other types of long gun are not.
There is also the appeal of the shotgun as a low-key defensive shotgun that doesn’t have much negative connotation. The double barrel is about as politically correct as a shotgun can be. We wish we did not have to consider this, but sometimes we do. The double barrel is also fun to shoot. It is practical as well.
When all is said and done, the double barrel shotgun remains a formidable weapon for personal defense and outdoors use. These simple, rugged, and workmanlike shotguns are well suited to many traditional shotgun chores. These chores include serving as a go anywhere, do anything, all around tool for hunting, pest control, and personal defense
My personal Century Arms double barrel was ordered in 20 gauge. Available in both the hard hitting 12 gauge and the light kicking 20, I elected for the 20 gauge so everyone in the home could use the shotgun well. The 12 hits hard and may be your choice. The 20 gauge kicks about half as much as the 12 gauge and carried about 55% of the payload.
This is a neat little bead sighted shotgun that handles well. The hammers are not difficult to cock, and the triggers are crisp enough. The hinged action was stiff at first but became easier to use with a couple of trips to the range. The overall length is 37 inches, and the shotgun weighs about 7.5 pounds.
The double-barrel action is compact and allows for longer barrels while retaining a relatively short profile. The barrels are 20 inches long. The choke is open cylinder, well suited for home defense but not for hunting at anything past 20 yards with birdshot. Most of the shells fired have been Winchester’s 7 ½ birdshot. This is a great training load. The recoil is light, and the shotgun handles quickly and gets on target fast. 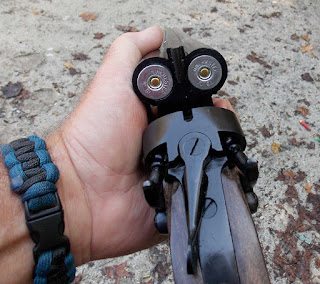 While I use birdshot for training, birdshot is by no means useful for personal defense. At best it will penetrate only a few inches of gelatin and would probably be stopped by winter clothing. On the other hand, Winchester’s #3 buckshot load holds 20 buckshot pellets. This load consistently offers a minimum of 12 inches of penetration in my testing and should cancel Christmas for the bad guys at typical home defense engagement.
With the open choke barrels of the coach gun, 15 yards is the limit for retaining a good pattern for best effect, which isn’t different from the average riot gun. For longer-range use, the Hornady 20 gauge Lite Slug is a great choice. Among a few high tech variants in 20 gauge slugs, this loading offers formidable effect at ranges longer than 25 yards. For home defense the Coach gun looks good. Affordable and powerful it is worth a look.
By Wilburn Roberts published on December 5, 2016
Republished from Cheaper Than Dirt Blog (highly recommended reading)


JR COMMENTS - Facing a charging Grisly Bear, there is nothing I'd prefer to have more than a 12 Gauge Double Barreled Shotgun with either 00 Buck Shot or Slugs.  After having a 16 gauge growing up and later having a hard time getting ammo, I'm a little hesitant to buy a 20 gauge unless it was for a beginner or person with a small build and low recoil was important.
For additional information see the following links:
Blog Table of Contents

Or click on a label below for similar topics.
Posted by Prepper Handbook at 6:51 PM