How Native Americans lost this country 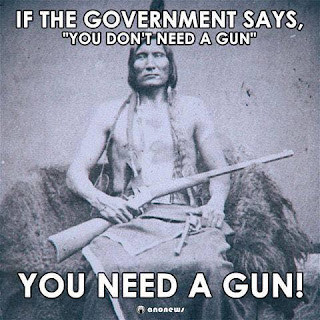 Through out history, more advanced societies have conquered and forced others into submission.  Advances as simple as a shield, a longer spear or the bow and arrows changed the course of history.  The American Indians or Native Americans were a classic example.

Why did this occur?
But they failed to act until they were out numbered by the invading foreigners. 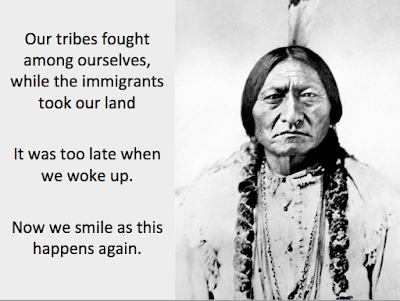 Had the Indians banded together and slaughtered all the invaders, every time they set foot on their shores, it might have been a different story.  That is what the Spanish Conquistadors did in several cases. Granted, there were many good people who came and some kind hearted (weak?) Indians even welcomed and helped them to survive. But the point remains the same.  The Indians did nothing until it was too late.

Today, this is happening again.  Soon immigrants & sympathetic citizens will will out number Sensible Patriotic Americans.  Will they round us up and put us on reservations?

Will they take away our gun rights and ability to protect our families and country, and give our country away?

YES THEY WILL.  Slowly, over time with what they like to call "Common Sense Gun Laws" which is simply slow steady erosion of our gun rights.

But I'm in no way suggesting violence.

We have a weapon now that the Native American Indians didn't have..... the VOTE.

We must vote the Gun Banners and Open Border advocates out of office.  The Rights, Freedom and Security for our Children depends on this.  We cannot sit home and do nothing.  We must Vote with our ballots and with our actions.  We must refuse to do business with Gun Banners and those that want to give our country away.

Here is a list of Gun Banners to take such action against: ENEMIES OF A FREE STATE

Beyond this, you must get out and VOTE.


Posted by Prepper Handbook at 9:42 PM