We are burning about 96 million barrels of fossil fuel a day, polluting and overpopulating our planet. But is Global Warming caused by human activity or simply a natural cycle?

Let's look at the available science about our climate in a graphic from a Smithsonian web page.  Note that time moves from right to left. The far right represents 10 million years ago; the far left represents today.  Over millions of years, the earth has gotten cooler and cooler, but also had wider and wider swings in temperature. 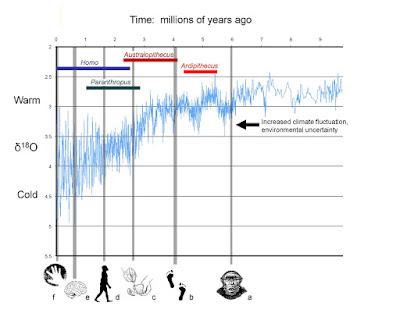 If we focus on the last million years graph from NASA, we see a cycle of rapid global warming followed by a cooler period for a temperature range of about 12 degrees C over a relatively short time period. All without influence by humans. The highest value was about 125,000 years ago and we are currently at (barely) the fourth highest value temperature in the last million years.This distance/time between the recent highs and lows is fairly constant and would suggest that we are more likely to be facing an ice age than global warming. However, it is probably a few thousand years away.

An even more recent period (below), again from NASA we see a temperature change of about 0.9 or just under one degree centigrade over 130+ years, a sample size of about 0.0016% relative to the top graph.  Clearly the temperature is going up, but nowhere near the 12-degree temperature swings we see above.

Does man damage our environment? Absolutely, you only have to look at the litter and pollution, but looking at the whole picture, global warming seems inconclusive.  The sample size is too small to conclude with any degree of certainty, and it could simply be normal cycles of the earths temperature. Further, human development and evolution advanced the most during wide temperature swings according to this Smithsonian link: http://humanorigins.si.edu/research/climate-and-human-evolution/climate-effects-human-evolution

Global Warming or natural cycle? Will earth experience a warming spike followed by an ice age and the answer is yes, but not within our life time, probably not within the next 10,000 years.

But if it did, we should be looking at an underground shelter, growing mushrooms to eat or migrating to the equator where crops might still be grown.  For more information on surviving an Ice Age, see:  Surviving an Asteroid Impact.

Posted by Prepper Handbook at 10:39 PM