Why I avoid doing business in Gun Free Zones

It is important that we avoid Gun Free Zones and send the message that such a decision can cause businesses to lose customers. 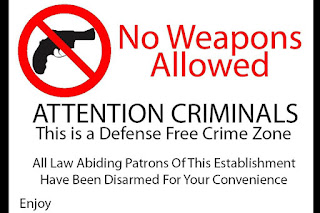 
For more information see these links:
This last one tells about some of the errors in the Gun Banner reports and how fact check organization said it was mostly false.
For additional topics from the Prepper Handbook see: BLOG TABLE OF CONTENTS

at http://prepperhandbook.blogspot.com/2015/07/blog-table-of-contents.html
Posted by Prepper Handbook at 5:11 PM